The City of Glasgow is the largest in Scotland and with a population of around 600,000 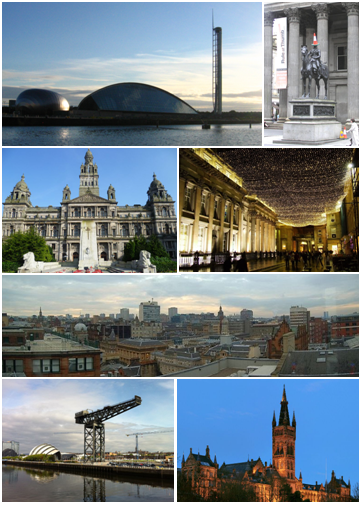 people, is the third most populous in the UK. It is the heart of Scotland and despite the rain, Glasgow is a beautiful city with stunning architecture. With the huge range of shopping destinations, museums, theatres, pubs, clubs, restaurants and a huge music scene, you will never be short of things to do in this buzzing city.

Glasgow is the UK’s second biggest shopping district with several shopping centres including the impressive and newly built Silverburn, just off the M77 in the Southside of the city, Buchanan Galleries, St Enoch Centre, Princes Square, Merchant City and many more. Next to Glasgow University, in the West End of the city, Byres road provides an alternative range of smaller boutiques and specialised shops, including an interesting array of antique and crafts shops, designer homeware boutiques and vintage clothing and record stores.

Glasgow has a fascinating array of beautiful architecture having been previously awarded the title of UK city of Architecture and Design in 1999. Some particularly impressive buildings include the Glasgow City Chambers, the main building of Glasgow University, The Kelvingrove Art Gallery and Museum as well as St Mungo’s Cathedral.

With the newly built Transport Museum as well as The Glasgow Science Centre (including the impressive IMAX theatre) , Kelvingrove Art Gallery and The Museum of Scottish Football at Hampden Park, Glasgow hosts a vast array of different museums to accommodate a variety of different interests whether you prefer Art, Natural History, Science or Sport.

Glasgow is also the host of the 2014 Commonwealth Games, and since winning its bid the city has invested millions in the city’s transport and sporting facilities, ranging from the £113 National Indoor Sports Arena, to modernisation of the underground and suburban rail network.

For a great night out, there is an endless list of top of the range restaurants, pubs and clubs. Ashton Lane is the premier destination if you are looking for a beautiful, buzzing place to go for a few relaxing drinks. As well as this, if Theatre is your thing, there is the Kings Theatre and Citizen’s Theatre amongst many others.

Glasgow is renowned for its huge music scene. Artists that have arisen from the city include Travis, Franz Ferdinand, Paolo Nutini, Biffy Clyro, Calvin Harris, Glasvegas and Kassidy. There are many venues to enjoy music including the SECC, O2 Academy, O2 ABC, Oran Mor and King Tuts, where Oasis were famously discovered.

Overall Glasgow is a great place to visit with many attractions and a great sense of culture. And if that is not enough, you may fancy a trip to Edinburgh, just a 45 minute train journey away, or Loch Lomond, if you want to have a quiet day in the Scottish Countryside.